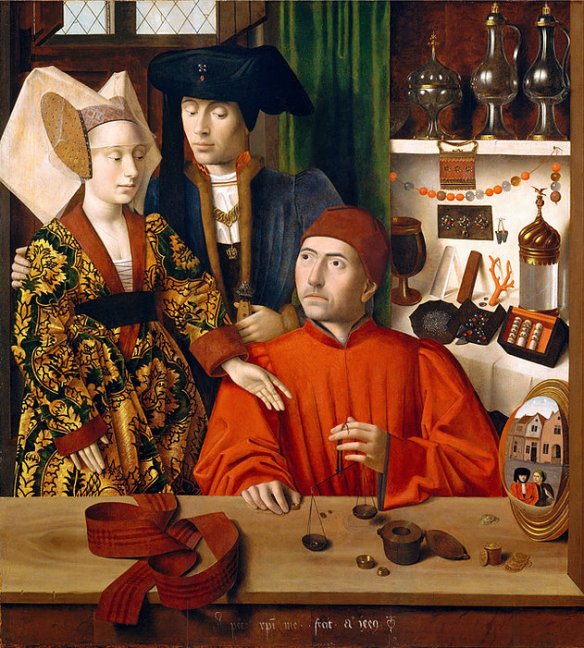 • A Goldsmith in his Shop, Petrus Christus 1449, Robert Lehman Collection, 1975,
on view at The Met Fifth Avenue

So why in 1449 did Petrus Christus choose to ‘disguise’ Joan of Arc and the reference to the siege of Orleans in his painting, A Goldsmith in his Shop, apart from the historical fact that the “Maid” dressed in male attire to conceal her identity?

It wasn’t until seven years later in 1456 and 25 years after being burned at the stake that a posthumous retrial declared Joan innocent of the charges brought against her. Before then, the official line was that Joan was guilty, not only of heresy, but of cross-dressing.

So producing a painting gloryfying the deeds of Joan before her posthumous trial carried risks. Hence the reason for the surreptitious approach taken by Petrus Christus in 1449.

But Petrus was not the first painter to “immortalise” Joan in this way. Jan van Eyck did so shortly after her execution in May, 1431. In fact, just 12 month’s after the Maid was put to death at Rouen, Jan unveiled her image to the public on May 6, 1432. 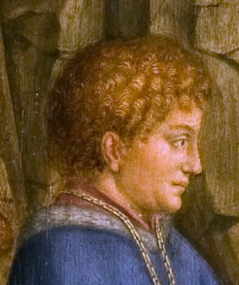 It’s unlikely that many who came to admire the Ghent Altarpiece would have recognised Joan in her male attire and featured as one of the riders in the Just Judges panel. She is the hatless figure wearing the blue mantle.

Pterus Christus knew this, as was likely did other contemporaries of Jan. Petrus reworked the Just Judges concept for his Goldsmith presentation. Much of the iconography created by Jan is repeated and adapted for the Petrus painting and explains just why Petrus was inspired to include Joan of Arc in his work. He is paying homage to a predecessor and mentor, Jan van Eyck.

The iconography in the Just Judges panel is heavily woven into several themes and there is a multi-level of identities. Most of the figures represent three different people and each is connected to an identity alongside.

The much researched Quatrain featured on the closed section of the altarpiece is a major clue to unravelling the principal narrative in the Judges panel which links to other panels in the altarpiece.

More to come on this.