In a previous post I revealed how Hugo van der Goes embedded a reference in the Panel of the Relic to a medieval poem titled William’s Vision of Piers the Plowman. This was to mimic the references Jan van Eyck made to Geoffrey Chaucer and The Canterbury Tales in the Ghent Altarpiece. Another ‘tale’ that was provided a place in the Just Judges panel of the altarpiece was the Plowman’s Tale, said to have been sourced from Pierce the Plowman’s Crede. Van der Goes also included references to these two poems in the Panel of the Relic.

Barthélemy van Eyck picked up on Jan’s references and depicted the conversation between the Pelican and the Griffin in the January folio of Les Très Riche Heures. Hugo went further back in time for his source to a similar debate found in the poem, The Owl and the Nightingale.

It’s not difficult to recognise Hugo’s owl in the Panel of the Relic. It’s the figure portrayed as Jean Jouffroy, except that in this scenario the figure is given a fourth identity, William of Paris, a Dominican priest and theologian, and confessor to the French king Philip IV. He was made Inquisitor of France in 1303 and began a campaign against the Templars in 1307.

The other three identities Hugo has applied to the figure in black is Jean Jouffroy, René of Anjou and Pierre Cauchon.

The link to William of Paris comes via the group of three Van Eyck brother alongside Jouffroy. The four men are also grouped in one of the scenes from the triptych painted by Rogier van der Weyden, known as the Seven Sacraments Altarpiece (1445-1450), now displayed in the Royal Museum of Fine Arts, Antwerp.

William of Paris completed writing the Dialogus de Septem Sacramentis (Dialogue of the Seven Sacraments) in 1314, the same year the Templar knight Geoffroi de Charney was executed, burnt at the stake on a small strip of land in the River Seine.

The nightingale can be discovered in the central panel of the surplice worn by man in the red collar, already identified as symbolic of the Templar flag, the Beauceant. The panel also represents the island in the Seine, known as both Jews Island and Templars Island.

As stated in an earlier post Hugo van der Goes was an accomplished heraldic artist. ‘Engrailed’ around the top of the centre panel in the surplice is a series of of border arcs forming outward points. ‘Knight’ coupled with ‘engrail(ed)’ puns as ‘nightingale’!

Not without coincidence is the engrailed feature and the eyes of the man in black placed on the same level, although the debate makes clear the owl and the nightingale did not see ‘eye to eye’.

Turin’s Cathedral will be making the image of its Holy Shroud available through televison and social media channels on Holy Saturday (April 9).

The announcement by Vatican News reminded me of Jan van Eyck’s special interest in the Shroud and also the face cloth, known as the Sudarium, left in the cave after Jesus rose from the dead.

A sudarium is a sweat cloth but was also used as a cloth to seal an annointing with oil, especially when administering the last rites.

The Flemish artist Rogier van der Weyden showed this in his famous Seven Sacraments painting. The dying man depicted is Jan van Eyck, and van der Weyden has compared Jan’s suffering in death to the that of the crucified Christ – as being on the cross.

But there is another reason why Van der Weyden has shown Van Eyck’s head covered in a sweat cloth. It’s a pointer to a painting produced by Jan early in his career for the illuminated manuscript now known as the Turin-Milan Hours. Several of the miniatures are dated to around 1420 and attributed to an artist referred to as “Hand G”, believed by art historians to be Jan van Eyck.

The particular minature that relates not only to the Sudarium but also to Christ’s cross, therefore matching the connection made by Van der Weyden, is titled the Finding of the True Cross. It depicts the story of Helena, mother of Constantine the Great, discovering the wood of Christ’s cross during a pilgrimage she made to the Holy Land in the 4th century.

Three workmen are shown uncovering the buried relic, one of whom is Jan van Eyck who is wearing a sweat cloth.

As to the man on his right, could it be Jan’s brother Hubert van Eyck? 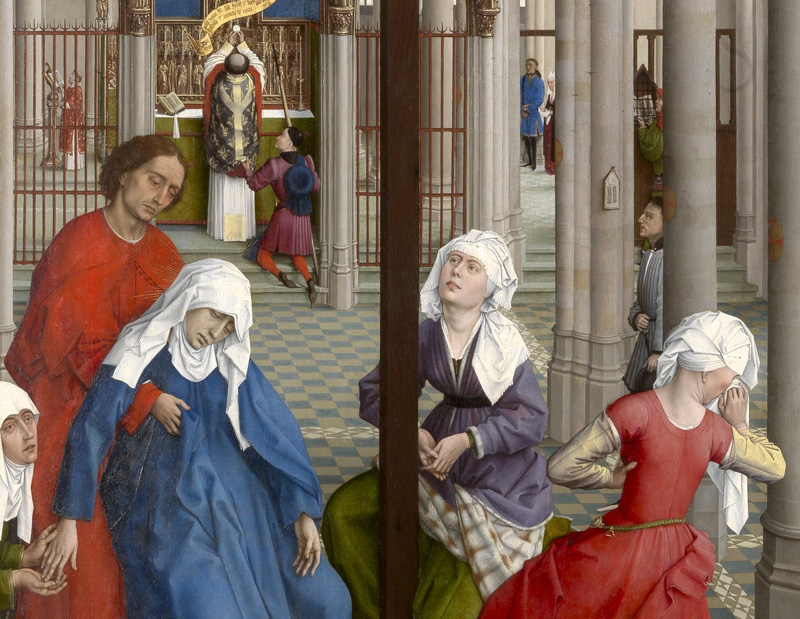 So why did Rogier van der Weyden make reference to Jan van Eyck in all of the seven sacraments of the famous altarpiece he painted just a few years after Jan’s death?

Augustine of Hippo defined a Sacrament as an outward sign of inward grace instituted by Christ. Was Jan perceived to be grace-filled – not only “one so excellent in his art and science” as once described by Philip the Good, Duke of Burgundy, but also in faith and life as a Christian?

There can be no doubt that Van der Weyden was an adherent of Van Eyck. The Seven Sacraments Altarpiece is not the only painting by Rogier to depict Jan in the frame. There are at least three other works.

More on the Seven Sacraments Altarpiece and the presence of Van Eyck at this link.