The painting below is attributed to the workshop of Roger van der Weyden and located at the Royal Museums of Fine Arts Belgium. Its title, King David Receives the Water of Bethlehem, is a biblical reference from 2 Samuel 23 : 15. The reference also appears in 1 Chronicles 11 : 17.
​
Measuring 50cm x 32.7cm, the painting is dated between 1451 and 1475. It appears to be a section of a larger work but I don’t have access to any information to confirm this.
​
The bearded man wearing a crown is presumably King David. The man with his hand on his sword is likely to be Eleazar, son of Dodo, and a soldier of David mentioned in the biblical passage (2 Samuel 23 : 10), who “stood his ground and struck down the Philistines until his hand was so numb that it stuck to the sword.”
​
The unusual shape of Eleazar’s hat points to the exaggerated beak of the now-extinct Dodo bird, while the turret-shaped crown is a reference to the Tower of David mentioned in Song of Songs (4-4).

The likeness of Eleazar is very similar to the facial features of figures in two other paintings attributed to Van der Weyden: the Joseph portrait associated with the Magdalen Reading, and the kneeling king in the St Columba Altarpiece. While it can be said that these may simply be stock portraits used by the Van der Weyden workshop, it is probably more likely that they are based on the features of one man in particular, Jan van Eyck, especially as the paintings show support to his identity in other ways. The three likenesses are shown below.

Another figure in the Water of Bethlehem painting can also be linked to works attributed to Van der Weyden. The pose of the ‘priestly’ figure with his hands on the shoulder of ‘Van Eyck’ is not dissimilar to the the stance taken by the man portrayed in the dual role of evangelists Luke and Mark in the St Columba Altarpiece, with his hand on the shoulder of King David. Another painting of Van der Weyden, St Luke Drawing the Virgin, shows a strong similarity between the facial features of Luke and that of the man in the Bethlehem Water painting. It is said that the depiction of St Luke drawing the Virgin is a self portrait of Van der Weyden. If that is so, then it is more than probable that Van der Weyden is also portraying himself in the guise of St Luke in his Bethlehem Water painting. Two artists in one painting. Is there a third – or even more?

The likeness to the bearded King David is also echoed in other paintings of Van der Weyden but if it is to be matched to any painter, then who? Again, Van der Weyden is the man providing the clues. His visual depiction of King David refers to the painter he was supposedly apprenticed to – Robert Campin. So in the Bethlehem Water painting we are presented with the three innovators of Early Netherlandish painting and eventually a group of artists referred to as the Flemish Primitives. The two other figures in the background are also likely to be painters from that period. 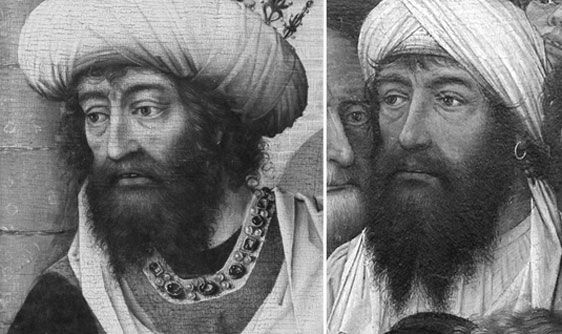 One of the major works of Robert Campin (also identified by art historians as Master of the Flémalle) is the Mérode Altarpiece, painted between 1425 and 1428. The left panel of the triptych shows two kneeling donors and behind them a small figure of a man holding a staw hat and standing behind a gate that opens to a walled garden. The figure is considered to be a self portrait of Robert Campin. The facial features bear a strong resemblance to the King David portraits of Rogier van der Weyden.
​
Associating Campin with the biblical King David of Israel was probably not only because the artist had a long beard. There was another more personal comparison to be made. Both David and Robert were proven adulterers. In David’s case he seduced Bathsheba wife of one of his soldiers who he later had murdered. Campin’s deeds did not extend to murder but he was accused of political agitation and convicted of adultery for which he was sentenced to banishment from Tournai. However, his punishment was later reduced to a fine after Margaret of Burgundy, wife of William VI, Count of Holland, intervened on Campin’s behalf. 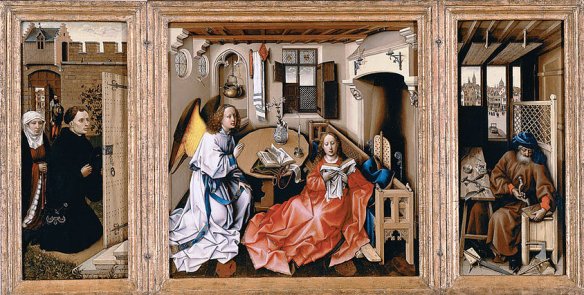 ​In the Mérode Altarpiece Campin makes subtle references to his infidelity. Not only does he portray himself as a weak man of straw, by clutching a straw hat, he places himself behind the garden door, as if hiding or waiting for his opportunity to enter the sacred room of the Virgin. This also echoes the biblical story of Susannah and the Elders where two judges hid in a garden before attempting to seduce Susannah. The motif could also be interpreted as Campin making a sign of public repentance, perhaps, standing in humble fashion and confessing his fault, similar to the tax collector in the parable about the Pharisee and the Publican (Luke 18 : 9-14).
​

Joseph, betrothed to the Virgin Mary, must have been deeply troubled when he discovered she was pregnant before they came to live together, and was all for divorcing her until an angel appeared to him explaining “she had conceived what is in her by the Holy Spirit” (Matthew 1 : 20).

Joseph, a carpenter, is depicted in the right panel making window shutters and mousetraps; surely a reference to Campin’s adulterous adventure(s)!​

The three Flemish Primitives are grouped in another of Van der Weyden’s paintings, the Birth of Christ, sometimes referred to as the Bladelin Altar or Middelburg Altar. The left panel records the Tybur Sibyl showing the Emperor Augustus an apparition of the birth of Christ. The three men on the right of the scene are Jan van Eyck (in his Tower of David hat), Rogier van der Weyden depicted as St Luke, and Robert Campin, once again shown as King David.
​

King David is seen wearing red stockings, the same colour as the man behind the door in Campin’s Annunciation painting. Unusually, King David’s gown is pulled back to reveal his naked thigh and a jewelled garter, perhaps a rather direct reference to his “sin of the flesh” and so to Campin also.
​
The Sibyl’s green gown, her blue sleeves and white headwear is reminiscent of the style and colours worn by the woman featured in Van Eyck’s Arnolfini Portrait.